Memorial Candle Tribute From
Mayhew Funeral Homes and Crematorium
"We are honored to provide this Book of Memories to the family."
View full message >>>
Memorial Candle Tribute From
A recipient of Gerald's great kindness
"The circle goes unbroken - May the threads of love woven wrap you in garments of"
View full message >>>
In Memory of
Gerald Roger
Brosseau
1951 - 2015
Menu
Plant a Tree In Memory of Your Loved One
Click Here 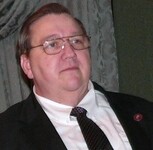 Born June 5, 1951 in Germantown, Pennsylvania, he was the son of Orville Entiene and Katharine (Heintzelman) Brosseau .

Gerald graduated from Northeast High School, class of 1969 in Fort Lauderdale, Florida and subsequently Miami-Dade College in the field of Funeral Directing and Embalming. Gerald was married to Margaret Ellen (Brundage) Brosseau on April 19, 1980. Gerald was a Licensed Funeral Director and Embalmer in New Hampshire and Florida. He proudly served on the Board of Directors for the New Hampshire Funeral Directors’ Association for many years, holding the position as Treasurer until his death.

Gerald was the CEO and a co-founder of Always On Call Answering Service, LLC, an award winning company based in Concord, New Hampshire. In his position, he developed a niche to provide specialized services to funeral professionals as an extension of their business. Prior to becoming a funeral director,
Gerald was an accomplished chef, restaurateur, writer, including being a radio announcer at WFTL Radio in his teenage years, earning the coveted Silver Mic Award at the age of 14. Gerald also enjoyed his time as an owner of a successful dairy farm in Troy, Vermont.

The Family has asked that memorial donations be sent in loving memory of Gerald to The Shriner's Hospital for Children - Tampa, 2900 Rocky Point Drive, Tampa, Florida 33607-1460

Order of the Eastern Star

White Shrine of Jerusalum
The insignias listed here may be subject to copyright and / or trademarked. Those copyrights and trademarks are owned by the respective organizations.
Printable
Share on Facebook